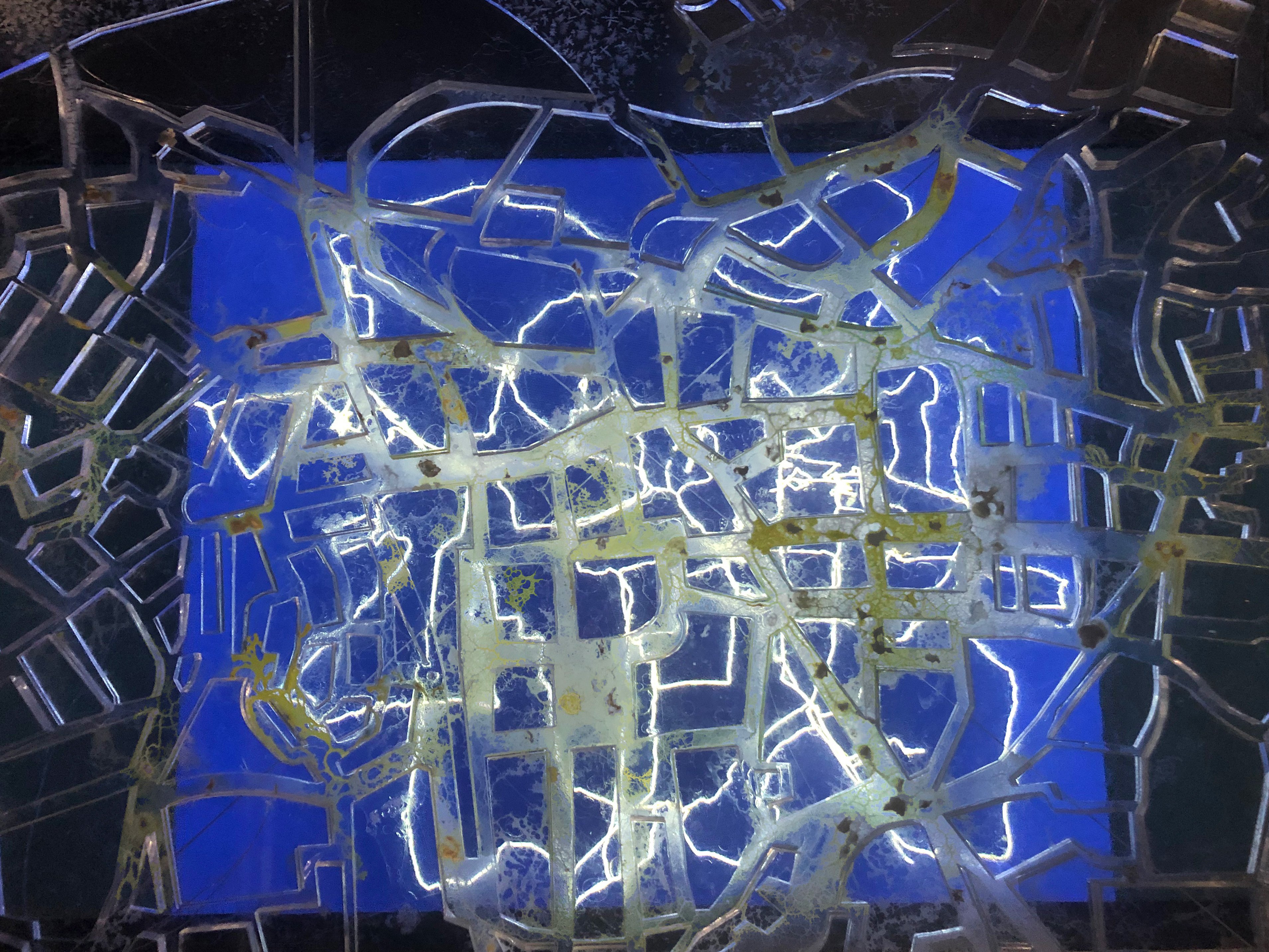 Slime mould
walking in
the city 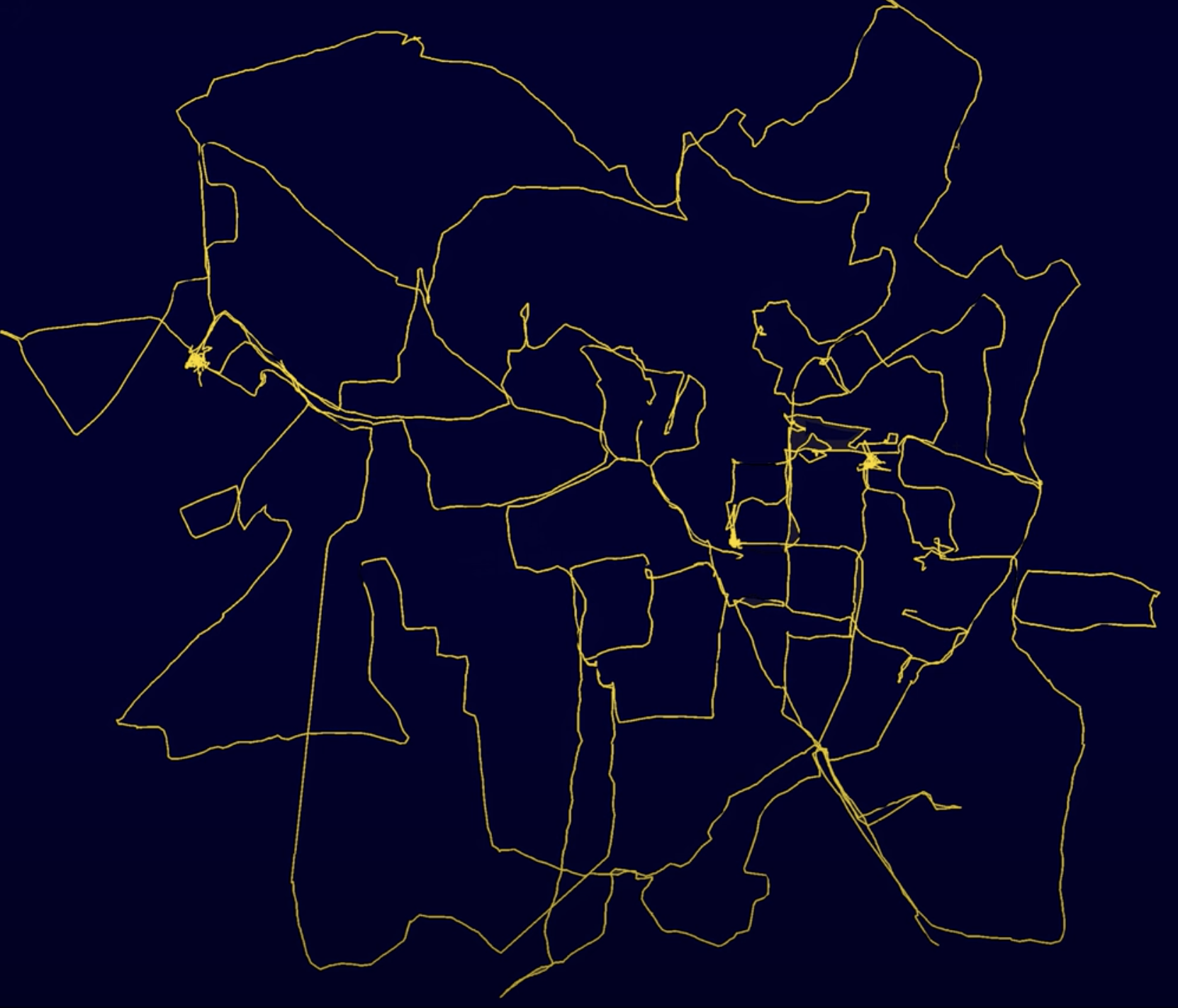 This piece was the start of my ongoing bio-art research, a creative practice that directly collaborates with biological organisms, bending boundaries between art and science, studio and lab.
Slime Mould (Physarum polysephalum) joined me in an interrogation of the hidden systems and patterns that connect us, humans, to our environment and the non-human world. Brightly yellow colored and happily kept alive on a simple diet of oats, Slime Mould is an ameba made from thousands of single celled organisms fused together into a, surprisingly, rapidly moving blob. There is no central brain or organ that directs its movements, yet it’s capable to create intelligent networks between sources of food and make what we could call “collective decisions”; it functions like a swarm, a behavior known as “emergent”.
‍
Influenced by the thinking of Gregory Bateson in “Steps to an Ecology of Mind”, I was investigating the questions of the limits of our perception in noticing the interconnectivity of the world we are enmeshed in, and the difficulty to become aware of our place and constant participation within these systems. In a word only made of reactions, building boundaries between disciplines or between “the human” and “nature” might damage lines that connect us to larger more subtle patterns.
Just like the patterns of decentralized networks created by the body of Slime Mould, cities are also systems resulting of collective emergent action. They shift, move, circulate as we inhabit them, most experientially evident through the action of walking. When we walk, we are writing the system without being able to read it. Looking at the city of Lancaster, where I lived at that time, I wanted to find out how exploring it through the non-human lens of slime mould would change things. Could it help me open up my awareness of my participation in this fluctuating, beating and beautifully complex system of human movement? What new noticing could arise from the translation of information across human and non-human scales, and the similarities between patterns? I set up a slime mould lab in my studio space to mediate this conversation.
‍
I first walked, and GPS tracked, the entirety of the city centre of Lancaster, resulting in a 30km line curving and twisting into a map drawn exclusively by the medium of movement. As I was walking, the Slime Mould was also walking in my studio - navigating its way across a 1m x 1m perspex model of the city of Lancaster which streets had been flooded in agar jelly for the soft wet body of the ameba to crawl through. Decisions in the routes I walked and the Slime Mould walked where communicated back and forth through placement of food sources, on the slime mould’s miniature city, and digital pointers, on the Google Maps route I was walking. An exchange of information that constructed a conversation between the perspex model in my studio and the damp streets of the northern city I was stepping through.
‍
The data collected, and ongoing performance as the Slime Mould continued to grow, were displayed in a multimedia installation that juxtaposed both patterns of movement by suspending the transparent slime mould city above a digital animation of my walk. A sound piece reflecting on Gregory Bateson’s idea accompanied the ephemeral installation, which literally allowed you to observe human movement through non human movement.
Video work and sound piece made with recordings of Gregory Bateson's lectures, a philosopher whose writing about cybernetics, interdisciplinarity and ecology influenced my work. 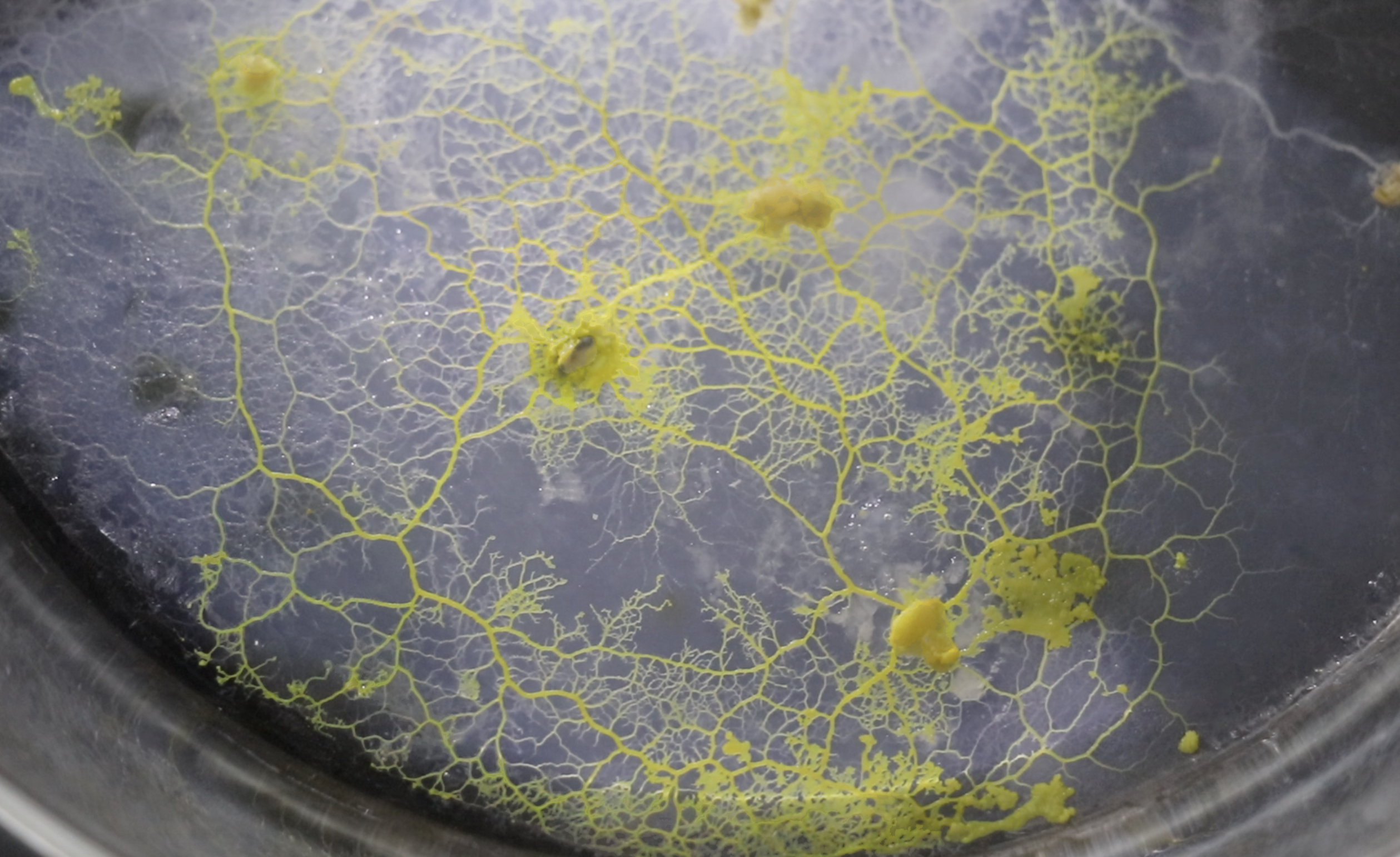 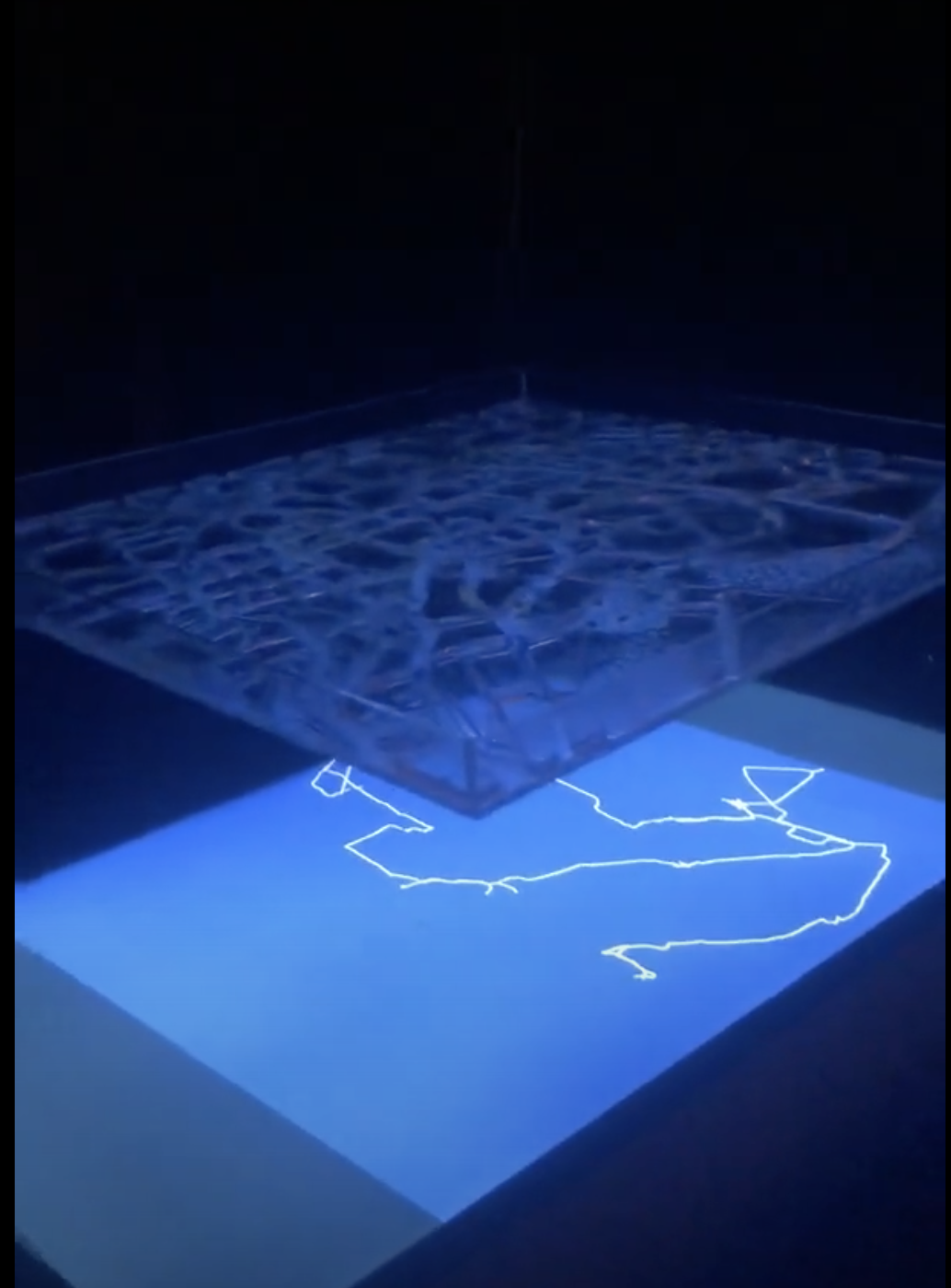 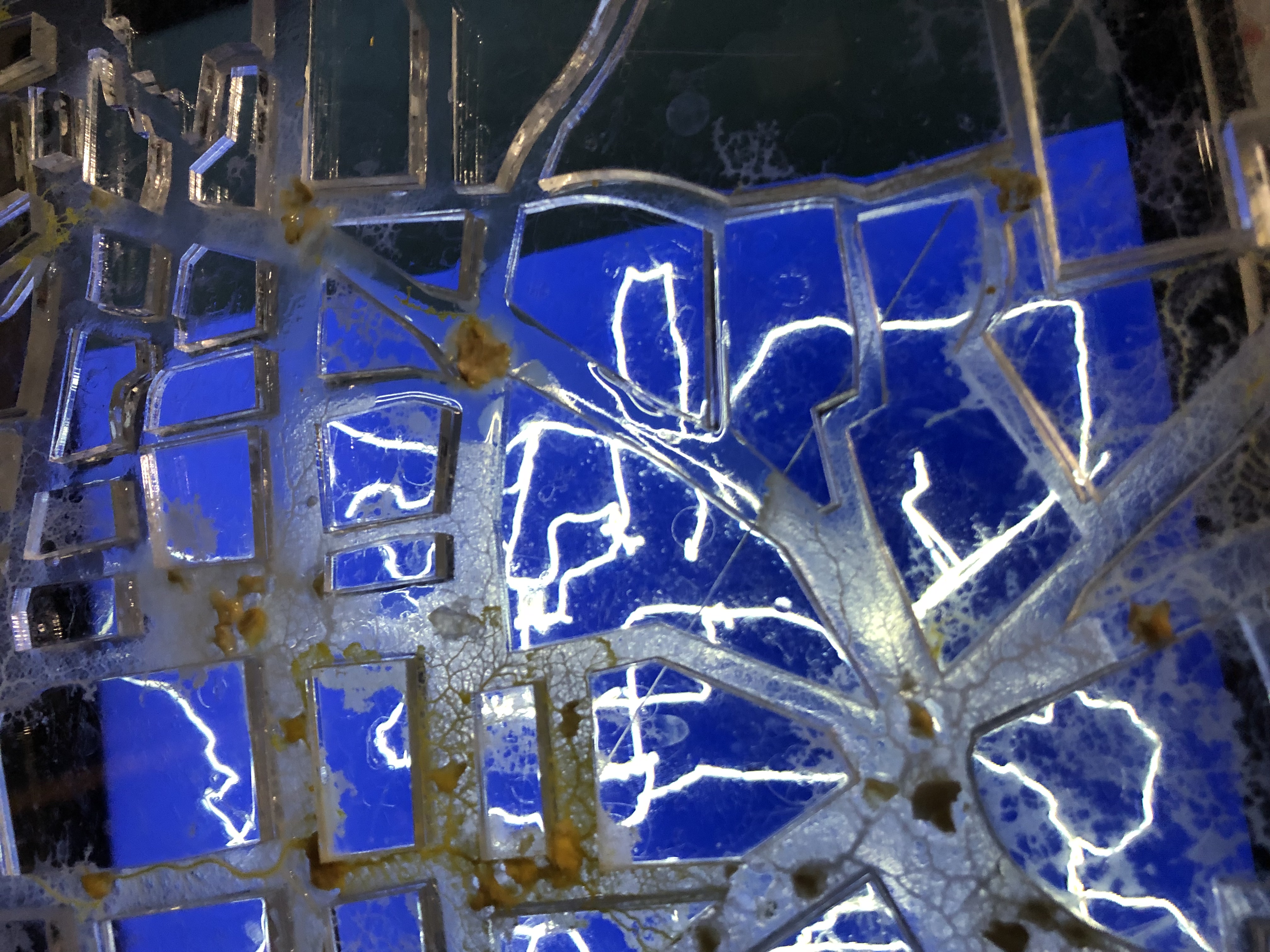 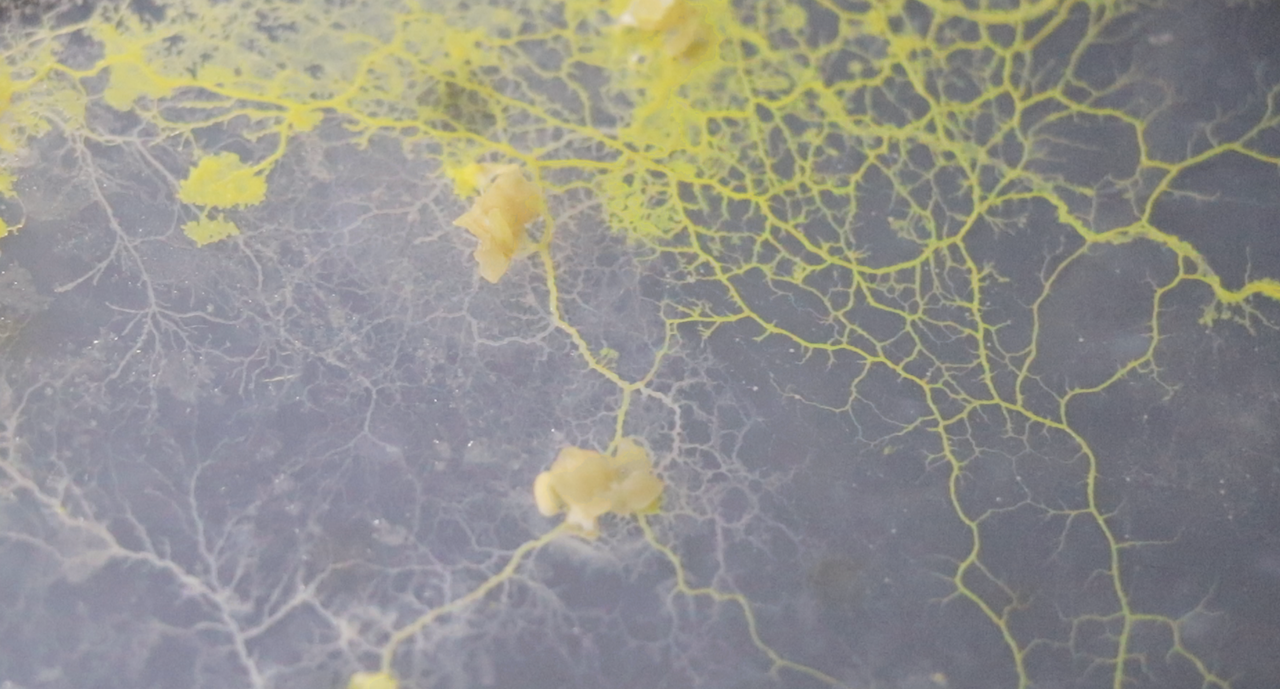